YouSeeU was seeking a partner for development, architecture, and systems integration support.

The digital economy has collapsed distances between students and teachers and transformed online learning into one of the hottest sectors of the economy, with the power to radically transform the globe. By harnessing the astonishing power of cloud computing and Big Data, alongside the flexibility of mobile and the connectivity of video, the way we learn is changing forever.

But getting to that point is not without its challenges. For the past five years, ClearScale has been working with YouSeeU to pioneer innovations and breakthroughs in online teaching and video platform delivery.

As a global leader in skills development for higher education and corporate training, YouSeeU recognized that it needed to partner with a cloud systems company that would deliver an elegant, innovative solution to match the scale of its ambition. How to scale into a global player? How to incorporate live streaming and mobile, while reducing costs and building a robust backend system that could manage the transformation?

"Our partnership with ClearScale/CloudNoc has enabled us to go to market faster and deliver a more robust service than we couldn’t have built on our own. We’ve leaned on their infrastructure expertise which enabled us to focus on the unique and proprietary products we deliver to our customers."
Jeff Lewis, PhD
Chief Product Officer

YouSeeU needed a partner that could provide development, architecture, and systems integration support. ClearScale began to work with YouSeeU in 2013, and mapped a way forward that would evolve the company’s infrastructure from a few local servers into a global, dispersed multi-cloud system that would transform how students can make presentations to their teachers, receive feedback, and master the skills necessary for critical thinking. At that time, ClearScale took advantage of the RightScale Cloud Management tool, enabling a more efficient use of the Amazon Web Services (AWS) platform in order to facilitate a dramatic improvement in YouSeeU’s system architecture and operational efficiency.

The partnership has moved from establishing a workable framework to incorporating new technologies that make learning more immersive across vast distances, and developing pioneering apps that are at the cutting-edge of technological innovation.

As AWS Platform continued to innovate its services, it became evident that Rightscale automation was stagnating and that AWS had superior features. It was quickly decided that a Virtual Private Cloud (VPC) on AWS would be a more suitable solution for the customer.

ClearScale also created a Streaming Engine server template that would generate arrays to automatically deploy and terminate Streaming Engine instances as required; ClearScale used Application and File Server templates to streamline those operations. This design was tested for availability, scalability, and functionality, then delivered with appropriate documentation.

The Magic of Mobile

YouSeeU’s patented video question-and-answer capability is one of the main benefits it offers to customers. Although video Q&A was available on its website, YouSeeU understood the need to build a version that could work on increasingly popular iPhone and iPad devices. ClearScale developed a sophisticated, flexible mobile app that was video-compatible, which involved a custom mobile API.

YouSeeU’s Q&A, their first mobile application was developed and launched using custom URLs that passed on parameters such as the current user session, Activity ID, Assignment ID and more. The Streaming Engine server authenticated users and managed video streams. ClearScale’s effort resulted in robust support on all iPhone and iPad models to accommodate a growing number of mobile users.

The Power of Video

YouSeeU decided to make several new types of video meetings available to customers on demand, to be enabled with open-source Web Conferencing software. To accomplish this, ClearScale created a custom API to compile information about planned video meetings. This information was passed to the newly-created scaling application, which managed the Web Conferencing software servers.

ClearScale collaborated with YouSeeU in the move to VPC, as a way to dramatically increase overall cloud security and to gain access to the growing number of supplemental AWS services. The project involved migrating from the RightScale tool to the newer Amazon Virtual Private Cloud (VPC) platform.

The chief concern was to upgrade the automation capabilities. An Amazon Machine Image (AMI) with a preinstalled Chef client was created, and Chef roles were created for Application, File Server, Web Conferencing software, Jobs Server, Streaming Engine, and Logging. The migration proceeded with initial data synchronization of the databases and static data. A practice cutover was tested, and then the real cutover was performed. 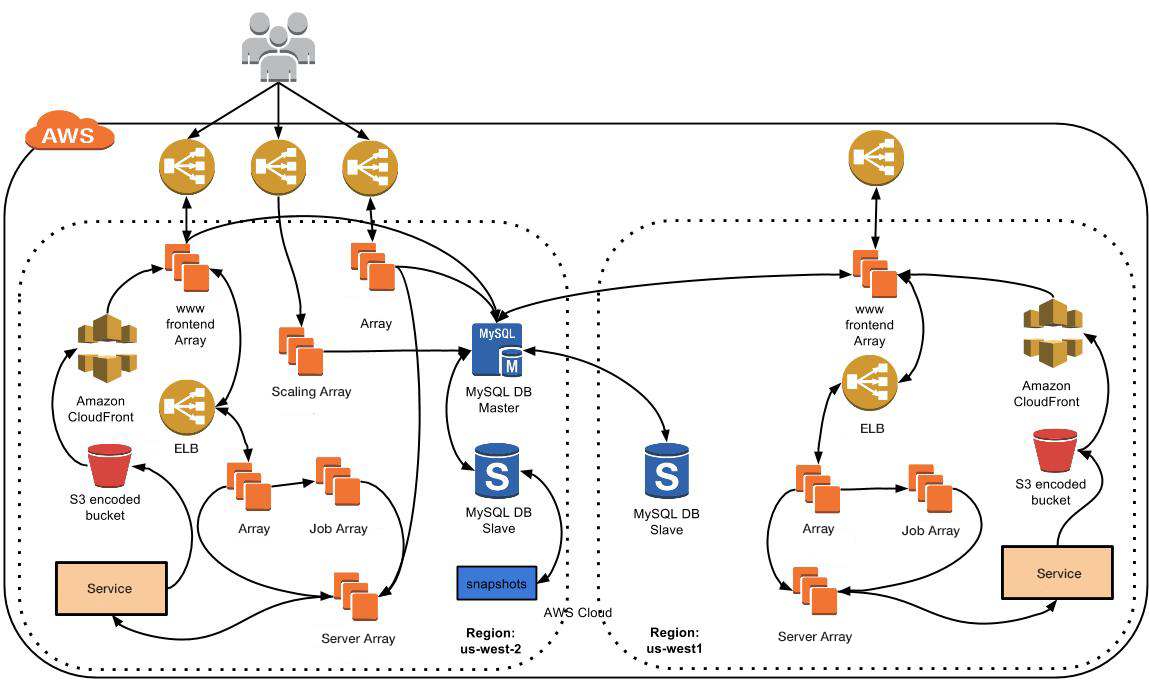 Deployment on a global scale is the strategy driving the relationship today. ClearScale delivered an AWS implementation of the U.S., Ireland, Singapore, São Paulo, and Canada regions. All service templates were refactored to Chef, and AMIs were created to assist in deployment.

In addition, the VPC was deployed to each region using AWS CloudFormation, and each region is currently monitored with AWS CloudWatch and AWS CloudTrail.

With the capabilities of mobile devices expanding constantly, a new mobile app with new features was required in order to deliver innovative, new interactive content.

Integral to the new YouSeeU Virtual Classroom app is the ability to deliver seamless video streaming, as it so crucial to the online educational experience that YouSeeU provides. Great strides have been made by reducing data latency by adding overseas regional endpoints.

The new app has been a huge success. It "allows a mobile IOS user to join a YouSeeU Virtual Classroom (or Sync Meeting) as a viewer and participant. The mobile user will have full audio and video capabilities with the built-in camera. They will also be able to use features like chat (private and public), view all participants in the meeting, view the deskshare, and view the whiteboard with all drawing annotations as presented by the moderator of the meeting."

YouSeeU has been using managed services via CloudNoc, a ClearScale company for three years, that centralizes services to combine fully integrated monitoring and a help-desk system with top-notch engineers to provide clients with superb value.

Thanks to its long-lasting partnership with ClearScale, YouSeeU has continued to deliver innovative video capabilities to many educational and corporate users. Users’ ability to collaborate on a project asynchronously, gather peer review data, and respond to video-based scenarios, to name just a few, has been revolutionary for both students and teachers.

Video is a flagship of YouSeeU. The company’s video services were vastly improved via Amazon multi-region setup and scalability, as well as by advanced automation and built-in troubleshooting, which combine to make the solution much more reliable.

Costs were reduced through use of the more efficient AWS Platform and implementation of advanced streaming services. Finally, with its renewed infrastructure on AWS, its feature-rich mobile applications, and its game-changing video capabilities, YouSeeU is well positioned to consolidate its status as a leading player in online educational services.