The Salvation Army wanted to accept new forms of payment but didn’t have the expertise to build a mobile donation app and website.

The Salvation Army can now collect and analyze cashless payments from millions of donors all over the world.

The Salvation Army, established in London in 1865, has been supporting those in need in His name without discrimination for more than 135 years in the United States. More than 23 million Americans receive assistance from The Salvation Army each year through a range of social services, including food for the hungry, relief for disaster victims, outreach to the elderly and ill, clothing and shelter to the homeless, opportunities for underprivileged children, and Christmas assistance to more than 3 million children and families each year. Eighty-two cents of every dollar donated to The Salvation Army are used to support those services in 5,000 communities nationwide.

"It’s amazing to see an app come together so quickly that resembles the simplicity of giving at the red kettle. We are so happy to offer our donors a quick and secure way to express their giving spirits, which empower us to serve more than 23 million people each year."
Lt. Colonel Ward Matthews
National Spokesperson for The Salvation Army

A familiar sight (and bell-ringing sound) on streets during the holiday season is The Salvation Army red kettle. Created in 1891, red kettles and their volunteers collect money to help more than 3 million American children and families in need during the Thanksgiving and Christmas holiday season. Red kettles can be found throughout the United States as well as around the world, including in Korea, Japan, Chile, and many European countries.

In the past, red kettles have collected cash donations. Recently, however, The Salvation Army started looking into new forms of payment. The organization wanted to create and host a simple mobile donation application and website, using the Braintree payment processing API to transfer funds from Google and Apple Pay.

Here’s how the app would work: When users pass by a red kettle volunteer at a storefront or city sidewalk, they scan a QR code on The Salvation Army sign using their smartphone’s built-in camera app. This starts a browser and moves to a predefined URL. A web page with buttons pops up and prompts the user to enter the desired donation amount. The app then prompts the user to choose a payment method (Google or Apple Pay). Once the payment has been transferred, the app displays a confirmation page.

The Salvation Army chose ClearScale, an AWS Premier Consulting Partner, to create this donation collection app, infrastructure, and website while providing monitoring and other ongoing support.

The ClearScale team met with The Salvation Army to discuss the requirements for creating a lightweight JavaScript (JS) app that integrated Braintree with Amazon Web Services (AWS). The timeline was tight, as the app needed to be ready to roll out by November 5, a few weeks before the holiday season began. This gave ClearScale a little over a month to design the architecture, then develop, deploy, and document the app. 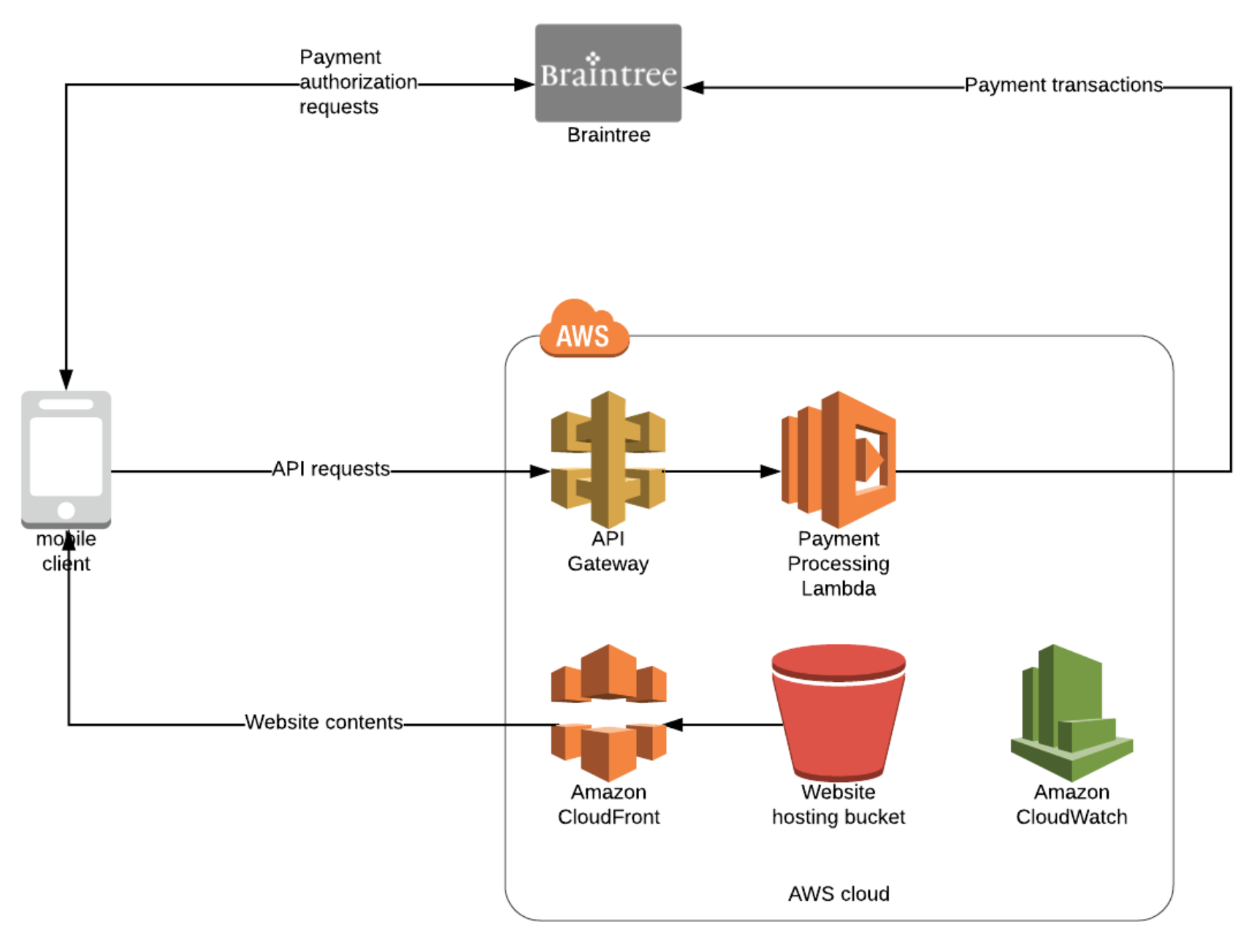 With this solution implemented, The Salvation Army’s new QR code-based donation collection capability allowed donors to scan a QR code to open a website and make a contribution throughone of several available methods. While this approach to cashless fundraising was effective, there was still friction in the user experience. Those who wanted to donate had to open their camera apps or, in some cases, install a QR code reader. The Salvation Army decided to re-engage ClearScale to see how the two could partner again to enhance the cashless donor experience even more.

ClearScale developed a proposal, which was presented to The Salvation Army’s national executive leadership team and National Advisory Board, to implement near-field communication (NFC) technology, which has many advantages. NFC tags can be placed on numerous types of surfaces. They are waterproof and don’t require any power. NFC tags are also supported by multiple operating systems and devices, thereby increasing The Salvation Army’s fundraising potential.

After getting approval from Salvation Army leadership, ClearScale began piloting the NFC capability. The team used JMeter for load testing and confirmed the value of the wireless bump-to-pay approach in December 2019 during The Salvation Army’s Giving Tuesday. Moreover, ClearScale’s experts delivered a method to identify each particular NFC tag via unique numeric identifiers that could be used for analytical purposes.

From a technical standpoint, ClearScale also prepared the nonprofit’s IT infrastructure to support the new level of anticipated donation traffic in a secure manner. For the national rollout, ClearScale ordered over 57,000 NFC tags for more than 40,000 locations across North America.

The new infrastructure with AWS CloudFront enables The Salvation Army to deploy its new Red Kettle donation application anywhere in the world and scale to millions of donors. Thanks to BrainTree’s integration with AWS API Gateway, all transactions are secure and managed efficiently. And using a serverless architecture keeps costs low.

And thanks to the new NFC functionality, those who want to donate to The Salvation Army simply have to bring their devices near an NFC tag to open a donation webpage. On top of that, The Salvation Army has access to robust dashboards and reports that help the nonprofit’s leaders identify new financial opportunities and areas of improvement.

The app now runs in select cities in the United States, and it may be rolled out to more cities nationwide next year. In fact, The Salvation Army recently tweeted: “If you're in #Seattle, #Dallas, #KansasCity, or #NewYorkCity, we've got a digital treat for you! You can now donate at a #SalvationArmy #RedKettle using Apple Pay or Google Pay! Give it a shot and let us know how it goes! #FightForGood”

Looking ahead, ClearScale and The Salvation Army continue to partner together and plan to address a new array of challenges in the coming year.