PBS wanted to develop a smart recommendation engine on AWS to offer a truly personalized experience to its millions of viewers while preserving brand and content uniqueness.

ClearScale helped PBS set up the data operations MLOps platform it needed to make high-quality recommendations to viewers, and a demo UI to test the platform before going live.

PBS now has a sophisticated smart recommendation engine it can enhance and evolve further as the organization creates more experiences for its audience.

PBS wanted to build a smart recommendation engine (SRE) capable of making high-quality suggestions to viewers based on a multitude of factors. To ensure success, PBS decided to partner with a cloud consultancy with AI/ML expertise and deep knowledge of the Amazon Web Services (AWS) platform. ClearScale was an excellent match for PBS and gave the nonprofit exactly what it needed to enhance viewer experiences significantly in the streaming age.

Like many of today's leading media and streaming platforms, PBS wanted to take its overall user experience to the next level. The organization hoped to provide audiences with better in-app programming recommendations based on a multitude of factors - deep links between titles, current popularity trends, user behavioral patterns, and more - to improve engagement and long-term loyalty.

On the surface, creating such a recommendation engine seems complex. Yet, the reality is that building these engines doesn't require data science expertise or AI/ML mastery. Companies only need to find the right combination of cloud-native tools and services, then feed them with their data. And with the right toolkit, these services don't take years to develop.

Fortunately, AWS offers managed AI/ML solutions that enable engineers to leverage pre-built models and automate much of the hard work of creating, training, and fine-tuning them. The challenge lies in knowing how to maximize what the cloud offers, especially given how quickly things change.

That's why PBS decided to approach ClearScale, an AWS Premier Consulting Partner with 11 AWS competencies, including Machine Learning, Nonprofit, and Data & Analytics. ClearScale is also a leader in MLOps, which is the type of technical expertise PBS needed to build the ideal recommendation system and sustain it over time. Together, PBS and ClearScale decided to move forward with an AWS-powered solution on top of Amazon Personalize.

"We worked with ClearScale to help set up and configure our initial solutions and data pipelines. We needed to leverage insights faster and launch something in months rather than years. Their experts set up an AWS cloud configuration and related services for using Amazon Personalize to help save us a tremendous amount of effort and thousands of engineering hours."
Mikey Centrella
Director of Product Management, PBS

For PBS to build a truly differentiated recommendation system, the company needed the latest and greatest cloud technologies available, on top of expert implementation guidance. 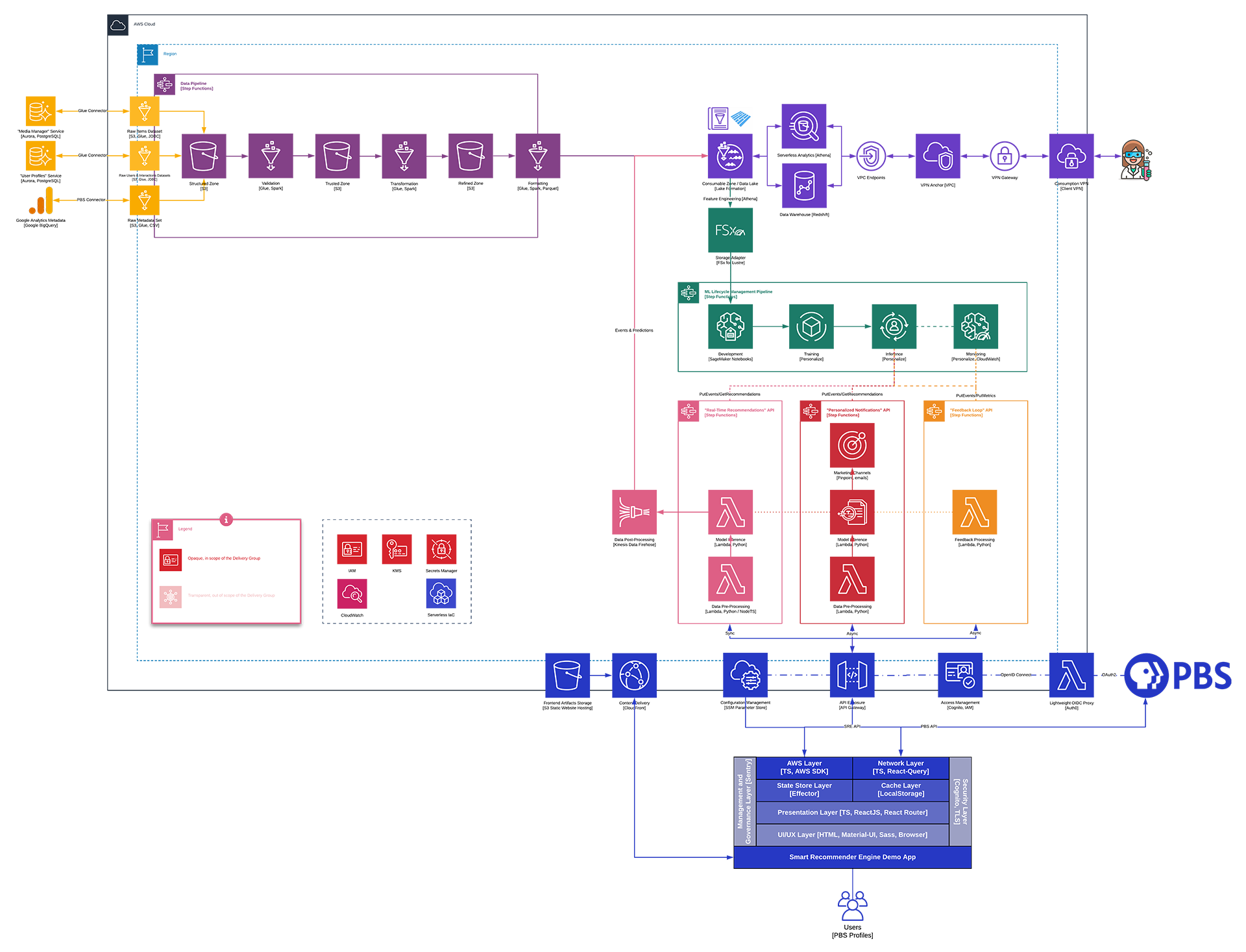 ClearScale came up with a detailed roadmap for tackling PBS's recommendation system project:

First, ClearScale and PBS determined together which data sources would feed into future ML models: 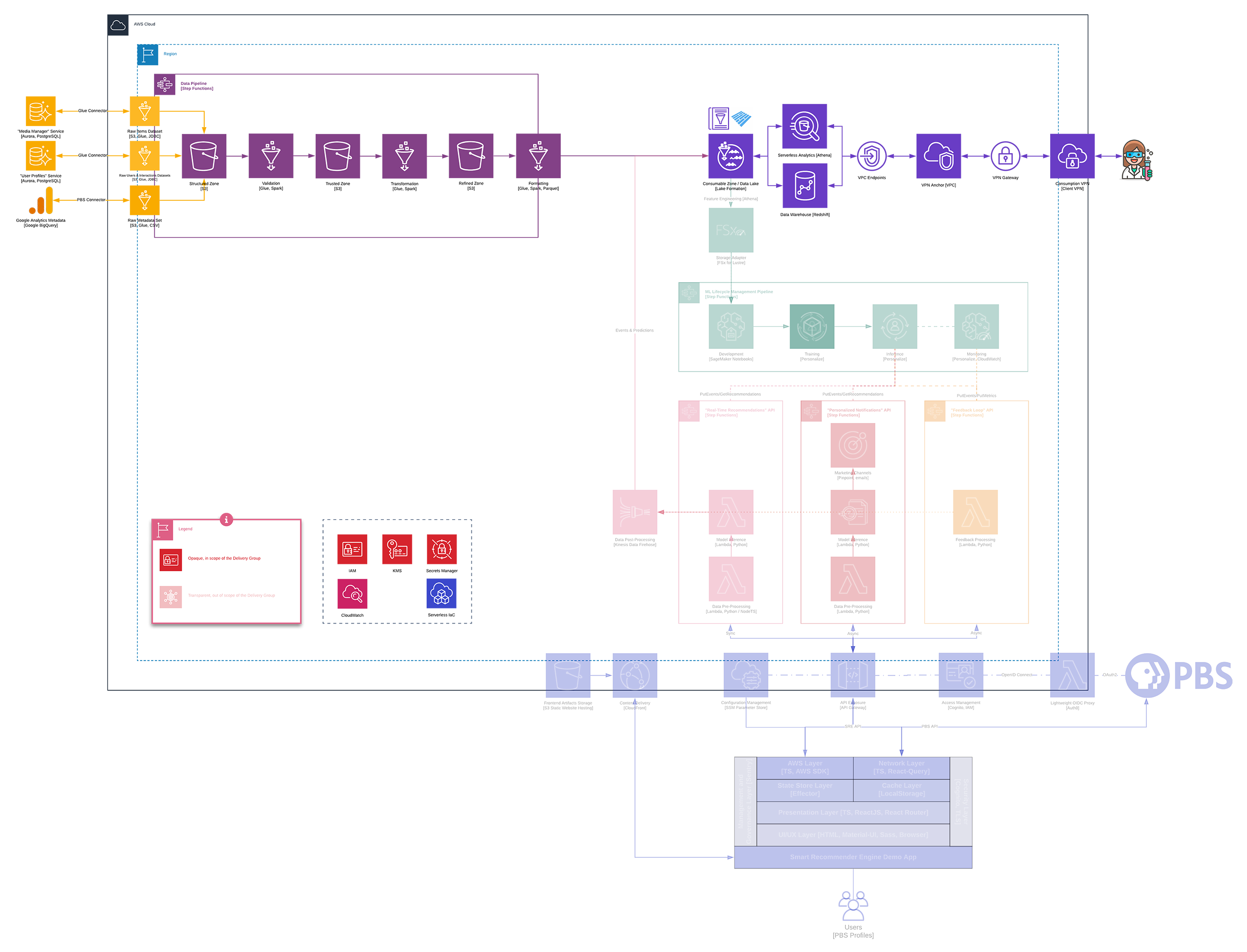 Media Manager is a content management system that PBS member stations use to publish and share titles across different platforms. Media Manager also contains rich metadata, such as a product's release date, tags, author, etc., and comes with rules that contribute to deciding what gets shown to viewers in search results. For instance, Media Manager takes a viewer's age or location into account before making a recommendation. That way, young children don't accidentally come titles for older audiences or viewers in a region aren’t recommended a news series from another location on the other side of the country.

ClearScale and PBS also decided to incorporate contextual information from Google Analytics to gain a more comprehensive understanding of who watches PBS content and where. Google Analytics has non-sensitive data about people that can be useful in making inferences about their viewing preferences. The platform can also see what types of devices people use to watch content, which can serve as another data point for a recommendation system to consider. For example, a viewer might watch PBS news on her phone during her train commute to work. But, once at home, she might watch Daniel Tiger on TV with her kids.

To consolidate data from the first two sources, ClearScale set up a prototype environment for an Amazon Aurora for PostgreSQL relational database. The database existed in full isolation from PBS production systems to ensure maximum resiliency for ETL processes. Google Analytics data was captured via an ingestion pipeline and stored in Amazon S3.

ClearScale then implemented a data pipeline starting with AWS Glue, a serverless cloud-native solution to crawl, validate, and transform data from diverse sources. ClearScale also configured AWS Glue to make data consumable by formatting it into Parquet and offloading it into a data lake. These steps are all orchestrated using AWS Step Functions, allowing PBS to benefit from automated stateflow management and exceptions handling.

AWS Lake Formation and AWS Glue Data Catalog were crucial for securing PBS' data lake and pointing other cloud services to the right data stores. Data in the lake can be accessed in two ways, both using standard SQL:

With the infrastructure for data operations in place, ClearScale was ready to tackle the MLOps side of the project. 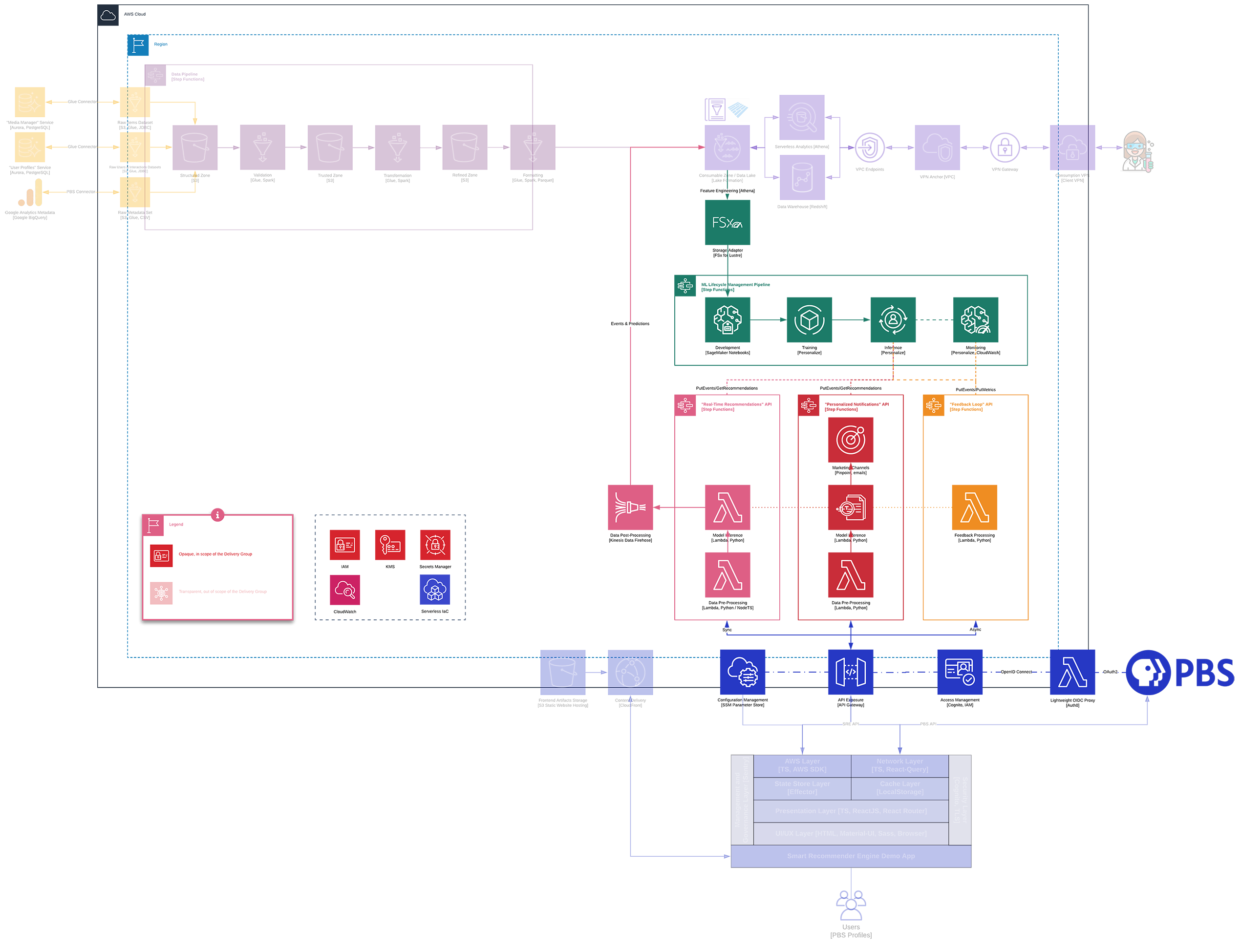 Fortunately, AWS gives companies the ability to harness the power of data science and Machine Learning across these four stages without having to build models from the ground up.

ClearScale data engineers took on the task of creating the initial version of the smart recommendation engine based on Amazon Personalize while keeping in mind that PBS engineers would eventually take full ownership. ClearScale used Amazon FSx for Lustre to make data available for the system as it's loaded. The team also integrated Amazon SageMaker Studio as the development environment ML engineers would use to maintain models.

At the center of the model pre-production work are AWS Lambda, Amazon Athena, and AWS Step Functions. ClearScale connected them with Amazon Personalize to fetch data, load changes, and train the model. With these services in place, ClearScale selected the core recipes (which are Amazon Personalize algorithms fine-tuned for specific use cases) for PBS' SRE and built four models based on different requirements per recommendations input and output:

ClearScale deployed each of these models at Amazon Personalize's unified REST API, backed by the Amazon API Gateway, to make findings from PBS' recommendation engine available to the many platforms that support the company's streaming application. Access controls are based on Amazon Cognito and AWS IAM to ensure viewers only have access to their own data. Each model's API consists of four close-connected microservices:

The world is not static in any sense, and neither is Machine Learning. As the environment evolves, trained models no longer operate as well as they did after being deployed. In 99% of cases, models degrade over time, decreasing the business value as well as end-user satisfaction: e.g., the items catalog receives new titles that are never seen by the model. In the best scenario, the model would refuse to recommend the title, introducing bias. In the worst scenario, the model would provide incorrect predictions leading to poor decisions. To ensure that the model is not frozen in place, it must be continuously retrained on the most up-to-date data and occasionally change its shape to fit new game rules.

The custom Model Monitor was added on top of Amazon CloudWatch to measure a precision metric that characterized the system's ability to make good recommendations to viewers. It doesn’t just monitor metrics, it also makes automated decisions based on them (e.g., retrain the model when it’s close to a certain threshold, so the metric value never drops below it, keeping viewers happy).

ClearScale's proof of concept for PBS yielded a "Precision at 10" metric of 0.0706. This number means, with every 10 titles recommended, at least one will be favored by the user with 71% probability. It’s worth saying that many other recommender systems can only achieve a 0.03 result.

The last phase of the project was to create a user interface prototype that would allow PBS viewers to personalize their accounts in a simple, visually engaging way. ClearScale created a demo web application that reused existing business logic and capitalized on the new recommendation engine. 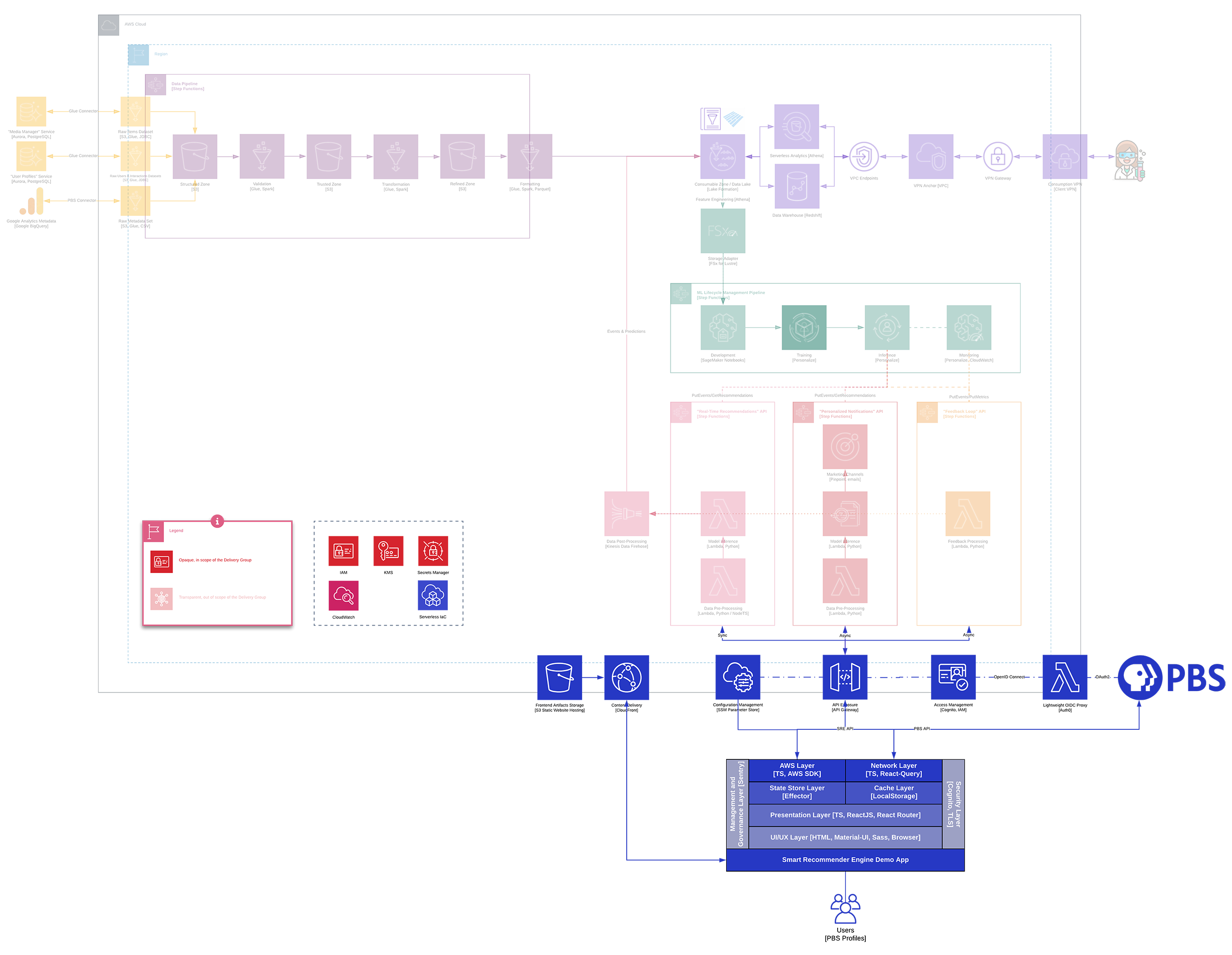 The Demo App was powered by TypeScript, ReactJS, and Sass for the UI, as well as for data management using Effector (client-side) and React-Query (API integration). While serving its purpose as a functional prototype, reflecting PBS's uniqueness with both styling and branding guidelines applied. And due to responsiveness, natively inherited from Material-UI, the demo app works equally well on desktops, tablets, and phones. 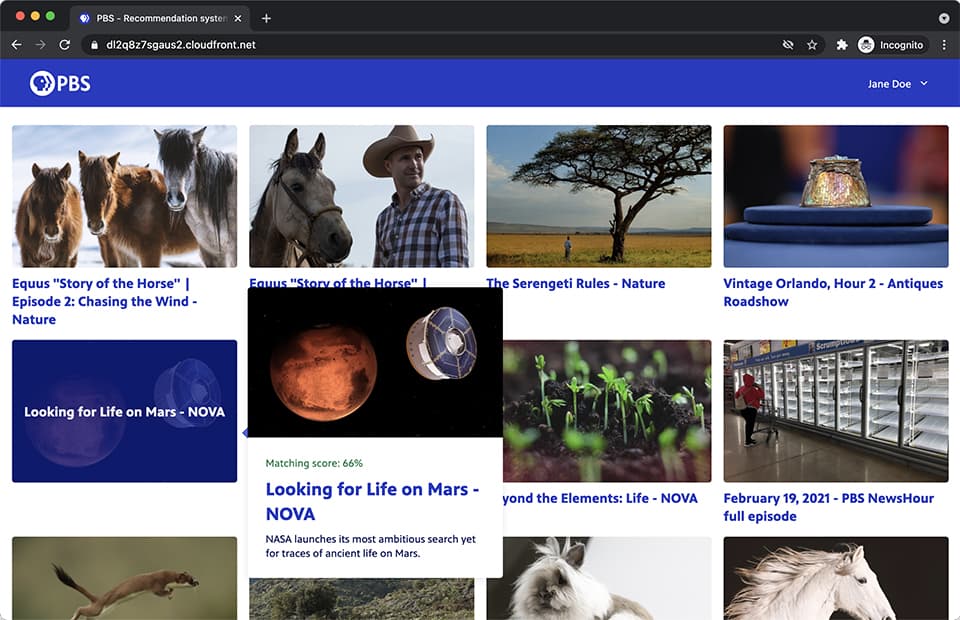 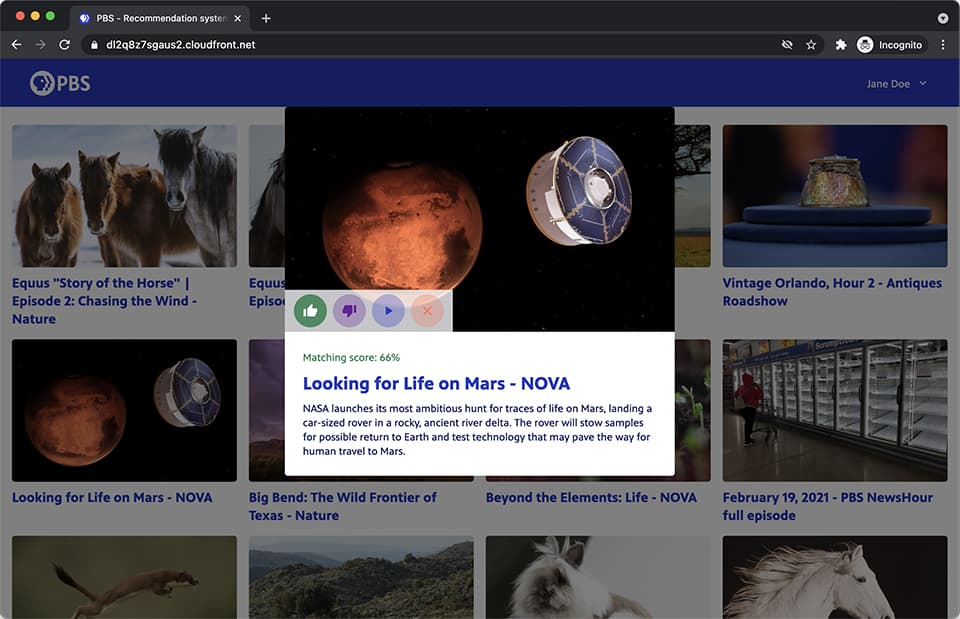 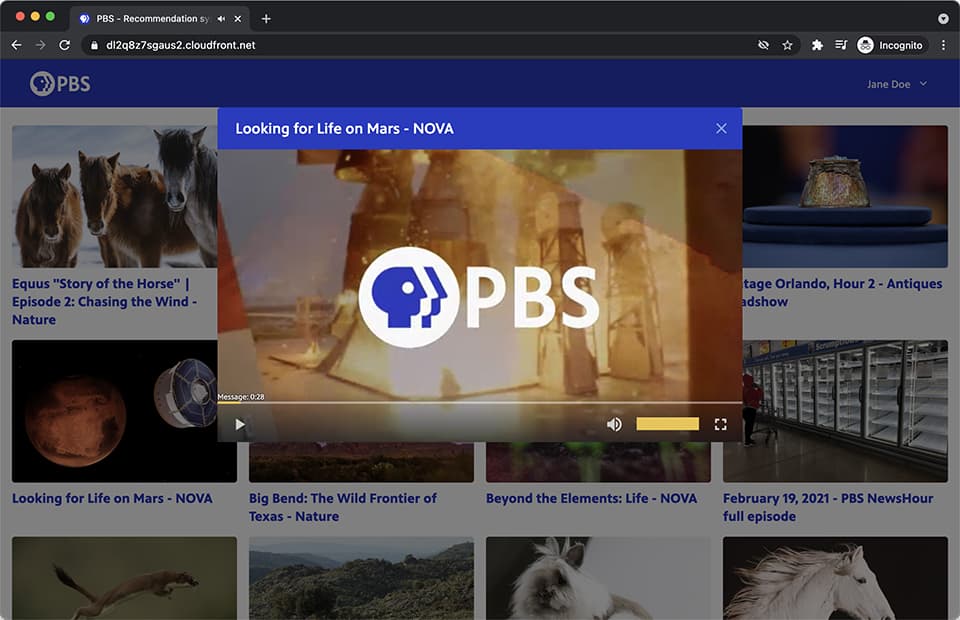 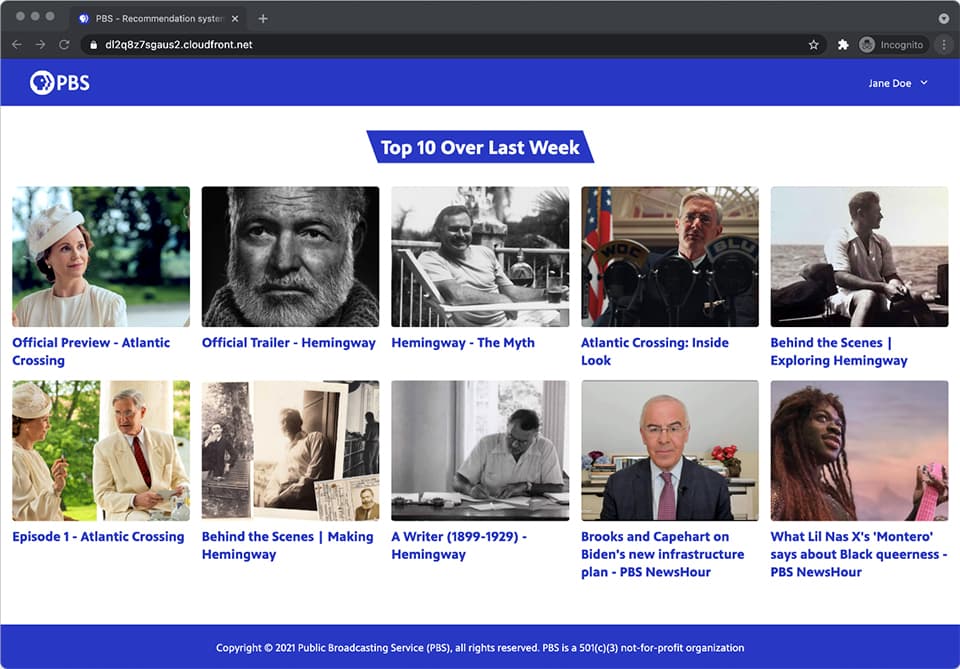 Today, PBS has an effective MLOps platform and recommendation system that it can build on going forward. The data pipeline that ClearScale set up cleans, validates, and enriches raw data PBS has accumulated over its 50-year history. The data that flows into the organization's recommendation system is consistent, accurate, and complete, making it a single source of truth for current and future AI-driven endeavors.

The new recommendation engine also gives PBS the ability to deliver more personalized experiences to viewers based on a myriad of factors. The four models that ClearScale built incorporate variables such as mainstream popularity, inter-title relationships, user behavior, and more to arrive at recommendations that are highly likely to please viewers.

Finally, the demo web application ClearScale developed for PBS showcases the power of the new recommendation engine in a user-friendly interface. It gives people the opportunity to quickly find titles they enjoy and share feedback on specific recommendations, empowering PBS to fine-tune viewers’ experiences.

At a time when major broadcasting companies are competing for viewership on numerous streaming applications, ClearScale helped PBS build its own ML-powered solution that leans on robust cloud-native tools from AWS. PBS now has a scalable MLOps platform it can use to provide better experiences for millions of viewers every day.