microTERRA wanted to automate field data collection from remote devices through the power of the IoT.

microTERRA can now gather, analyze, and visualize IoT data in a cost-efficient and automated manner.

microTERRA’s technology also has implications outside of in-land aquaculture. The company has the potential to treat wastewater rich in manure from other animals, including cows, chickens, and swine. After partnering with ClearScale, microTERRA has the IoT capabilities it needs to automate microalgae growth monitoring and enhance the value of its services for fish and livestock farming all over the world.

"Establishing a partnership with ClearScale and AWS allows us to quickly have a front-line data and cloud architecture that is scalable, secure, reliable, and cost-efficient. More importantly, it adapts to our vision and needs. It continuously transfers real-time data from the remote farms to AWS cloud infrastructure and allows us to build analytics faster. With Clear Scale, we also have a Front End to display a dashboard with actionable visualizations of the data."
Marissa Cuevas
CEO, microTERRA

microTERRA saw an opportunity to automate aspects of this process, including:

The company’s leaders envisioned a minimum viable product (MVP) on the Amazon Web Services (AWS) IoT stack that included a multitude of capabilities.

The solution also needed to take advantage of two types of analytics: real-time and batch analytics. In addition, microTERRA wanted users to be able to receive notifications instantaneously about next actions to maintain and operate the wastewater treatment system, environmental anomalies and threshold exaggerations.

Adding complexity to the project was the fact that microTERRA’s existing Raspberry Pi devices could not connect continuously to the internet. As a result, every device had to maintain internal storage space and be able to distinguish between new data and data that had already been sent to the cloud. The team also wanted its devices to utilize exponential backoff to properly handle network failures, which meant a de-duplication mechanism had to exist on the AWS side.

To implement these features, microTERRA needed to integrate with AWS IoT Core, possess an ability to control all devices from a central point, and enable over-the-air (OTA) updates. Finally, all devices had to maintain certain security standards and ensure reliable data transfer at all times.

Unfortunately, microTERRA didn’t have the expertise to execute such a complex IoT project of this magnitude. The organization decided to look for a professional cloud services provider with extensive big data and IoT implementation experience.

In ClearScale, MicroTERRA had the partner it needed to bring its IoT vision to life and extend the value of its aquaculture solution even further for local fish farmers.

ClearScale’s expert cloud specialists began by gathering all of microTERRA’s business requirements. With this information, ClearScale mapped out a solution consisting of four key elements built with AWS platform:

microTERRA needed a way to efficiently aggregate water quality data from all of its Raspberry Pi devices. While connecting a small number of IoT sensors to the AWS cloud is relatively easy, managing hundreds or thousands of devices is complex and time-consuming.

To address this challenge, ClearScale’s experts developed a device provisioning tool that connects devices to AWS IoT Core, and automatically handles certification management, Debian package device registration, and connection establishments. With this tool, microTERRA had a secure data ingestion layer that could support millions of IoT devices simultaneously. No matter how much or how quickly the company grows, ClearScale’s provisioning tool can scale accordingly.

ClearScale used Amazon DynamoDB, a NoSQL database that can scale to any size, for processed data. The DynamoDB tables store the information that is used to populate microTERRA’s analytical dashboards.

Finally, ClearScale set up an Amazon RDS Postgres database to store the structure of the role model used for the Web UI application. The Postgres database also collects technical info, such as alarm histories, so microTERRA can evaluate past water pollution levels.

Across these three data storage methods, microTERRA has a cost-effective, cloud-based infrastructure in place for maintaining all critical application data.

Because microTERRA wanted to execute both real-time and batch analytics, ClearScale decided to use a lambda architecture.

On the batch analytics front, ClearScale implemented the interactive query service, Amazon Athena, for data stored in Amazon S3. Along with Amazon DynamoDB, Athena is instrumental in populating the company’s data reports.

Together, Amazon Kinesis and Amazon Athena give microTERRA the ability to process and query IoT data rapidly, while only paying for computing power used. With these tools, the company’s users can keep up with device readings across a vast geographic footprint.

Finally, microTERRA wanted to be able to visualize sensor data to better understand the effectiveness of its aquaculture systems. 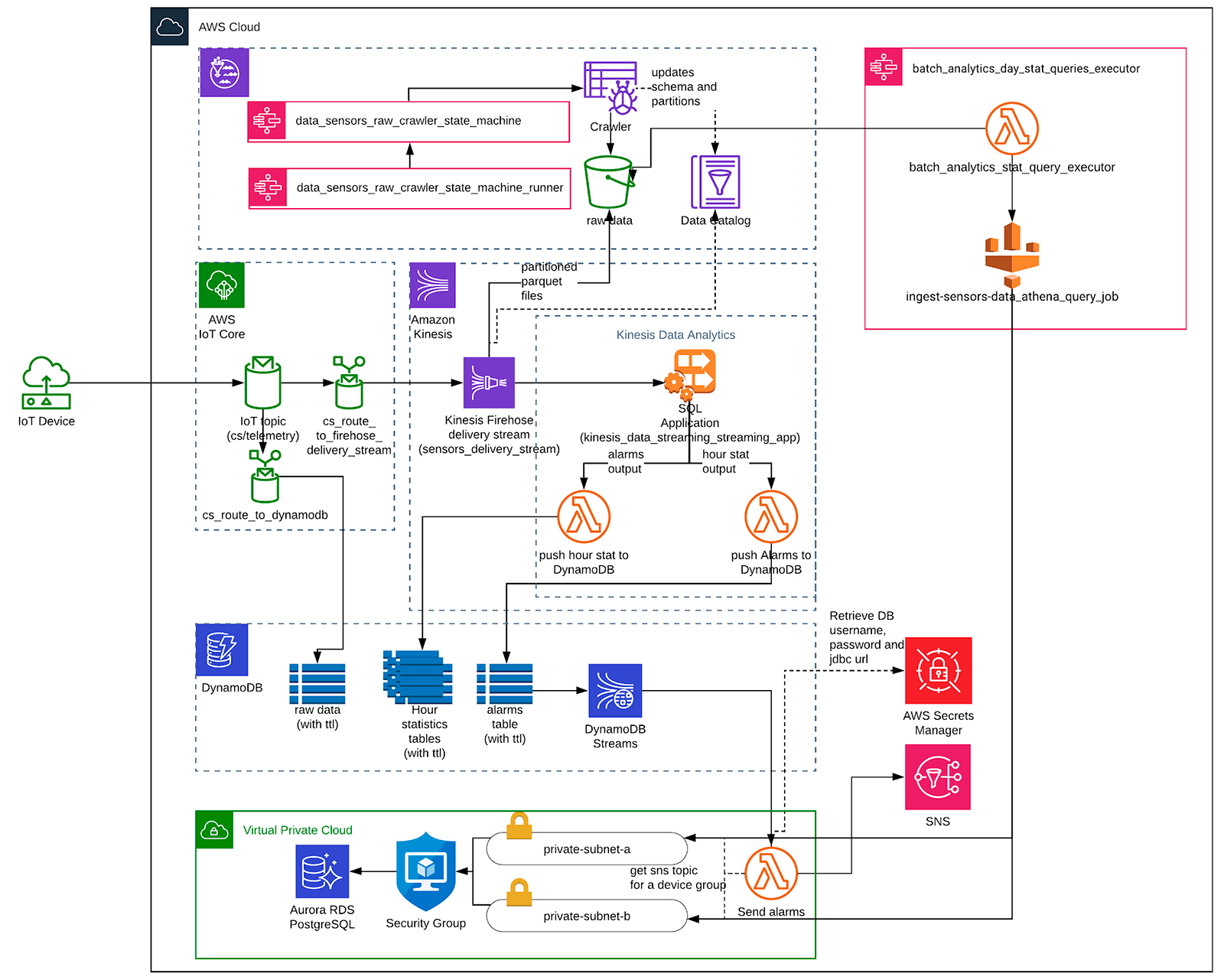 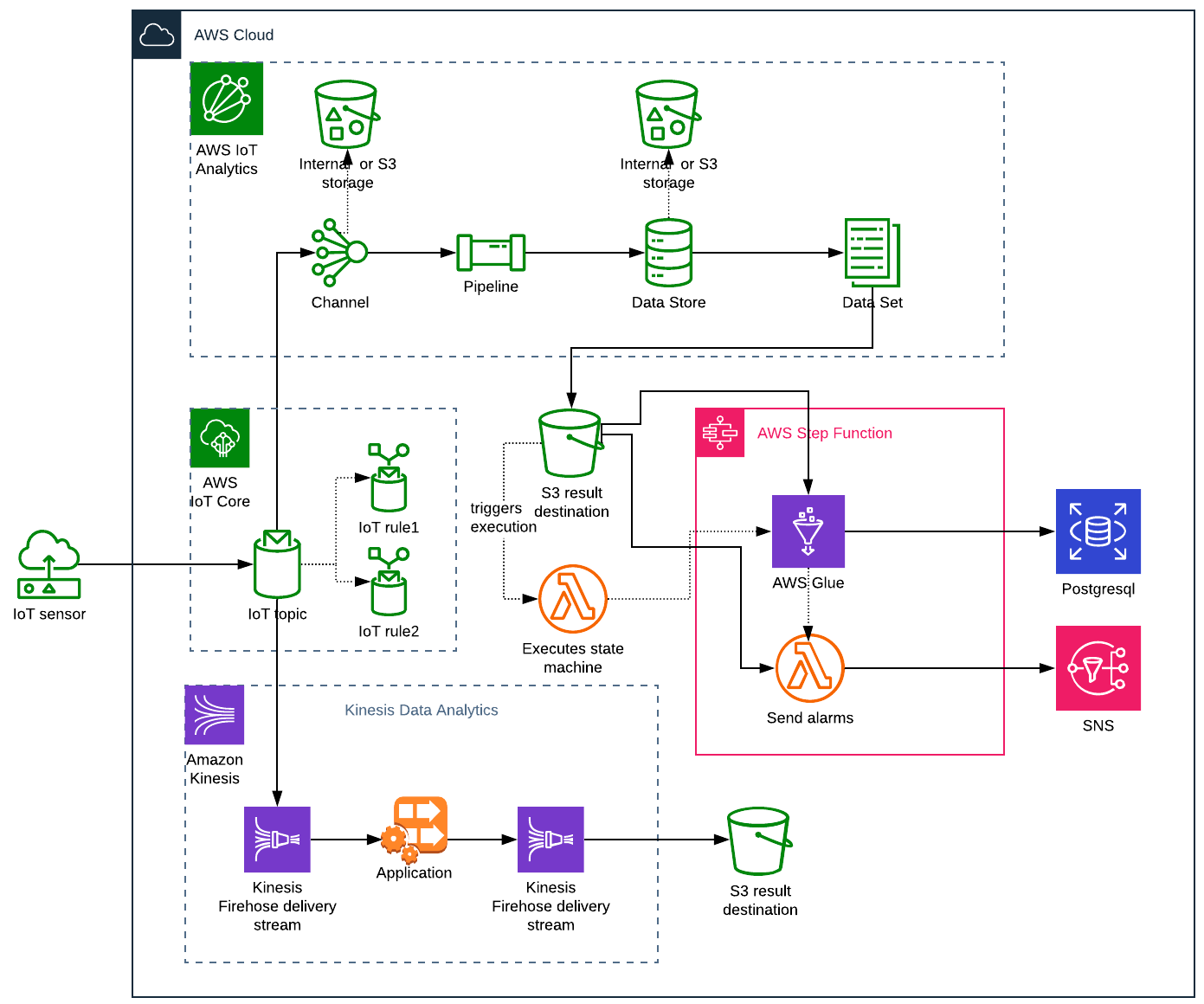 Thanks to ClearScale’s help, microTERRA now has a sophisticated and scalable IoT capability that is powered by multiple AWS cloud services.

microTERRA can easily manage its fleet of Raspberry Pi devices and monitor water quality across numerous project sites. The team no longer has to implement code updates or gather data manually, enabling individuals to focus on higher-value work.

microTERRA can analyze data in real time or in batches to assess water quality from different angles, as well as build insightful dashboards. Additionally, only one engineer is needed to support all devices, which means microTERRA spends less money on device management overall.

The biotech firm can also get to market more quickly with its flexible cloud-based data layers. microTERRA is able to execute complex computing tasks with tremendous efficiency, thus increasing the ROI of its aquaculture engagements.