Intoxalock was struggling to maintain high uptime and redundancy when running multiple applications, and the legacy app building and deployment process was time-consuming.

ClearScale developed a highly available and automated infrastructure on AWS using a variety of services, including Amazon RDS, S3, CloudWatch, and CodeDeploy.

Intoxalock now has separate environments for app development, staging, and production, all of which are consistent, secure, and stable.

Headquartered in Des Moines, Iowa, Intoxalock is a leader in the alcohol monitoring industry, primarily serving clients who are legally required to install an ignition interlock device or home alcohol monitoring unit. To ensure a reliable and accurate reporting to state administrators, the devices employ advanced technologies to enable GPS functionality, real-time reporting, and other features. These features communicate to Intoxalock’s IT systems, exchanging information among a network of more than 3,500 locations and state agencies.

Additionally, the company’s website and customer tools serve as valuable resources for information, lead generation, and support. A key problem of the Intoxalock legacy IT systems was the lack of availability in properly supporting the more than 15 web applications. That presented a challenge for Intoxalock — and led them to ClearScale.

"ClearScale has a great team of technical experts who have deep knowledge across the spectrum of AWS services. Their leadership team understands customer needs and have always provided us support when needed. As our applications are being transitioned to the new platform, ClearScale makes sure we have adequate support and coverage to back the new design their team put together. The ClearScale team frequently makes recommendations on industry best practices and takes a long term view on things with automation, cost and maintainability considerations."
Yogesh Hingmire
Senior Manager, Enterprise Architecture, Intoxalock

It was difficult for Intoxalock to achieve high uptime and redundancy when running multiple apps. That meant the company’s website, as well as both its web app development and deployment processes, were unpredictable and at risk for downtime.

Competing for resources on a single Amazon EC2 instance, apps experienced traffic bursts and other issues that negatively impacted other apps. Because they weren’t automated, the app building and deployment processes entailed time-consuming manual steps. If something went wrong, Intoxalock would experience significant downtime at inopportune times.

To remedy the situation, Intoxalock asked ClearScale, an Amazon Web Services (AWS) Premier Consulting partner, to assist in rearchitecting its web app development, pre-production, and production environments. In addition, the company wanted to automate its app building and deployment processes, as well as migrate live traffic to a new production environment. A key requirement for the total solution was assurance that it complied with AWS best practices.

AWS’s global infrastructure consists of multiple geographically separated locations called regions, which, in turn, are built of multiple isolated data centers known as availability zones (AZs). Among the features of the ClearScale solution were the configuration of the customer’s application (EC2) and database (RDS) tiers in multiple availability zones (Multi-AZ setup).

The Multi-AZ setup provides a failover feature that automatically ensures the applications hosted in EC2 will be tolerant to a fault of any of the availability zones. For RDS, a failover feature automatically provisions a primary database in one AWS availability zone and maintains a synchronous standby replica in a different one. The failed instance becomes standby after recovery.

AWS RDS also backs up DB instances — isolated database environments — daily and transaction logs at five-minute intervals. Both are stored for a specified retention period. This allows for restoring a DB instance to any second during the retention period, up to the last five minutes.

Intoxalock’s applications were sorted by their logical purposes and split onto multiple load-balanced, auto-scaled groups of EC2 instances. All groups of instances simultaneously serve the company’s domains and those of its customers. Two separate application load balancers work in parallel. 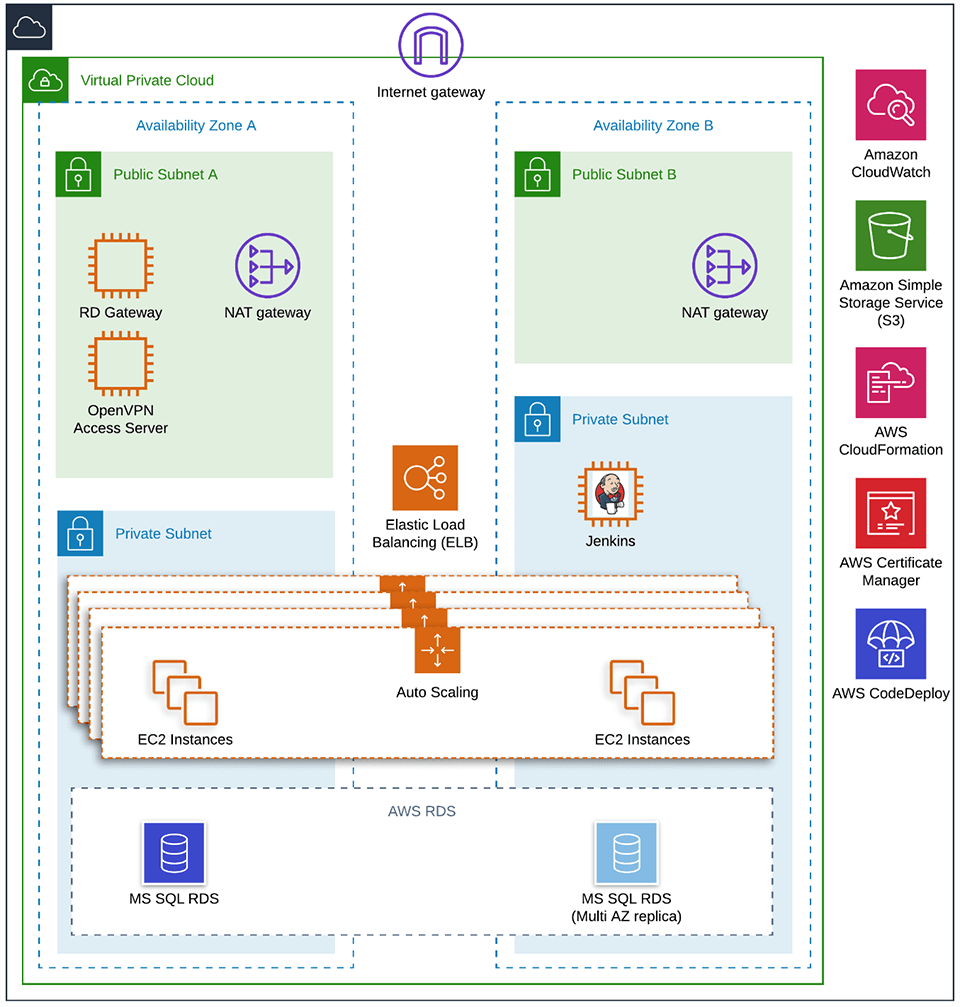 With the project completed, Intoxalock now has segregated AWS environments for application development, staging, and production. The environments are consistent and stable, ensuring high availability and security in line with AWS best practices. Threats of downtime are significantly reduced.

The processes for building, testing, and deploying applications are faster and more reliable. Application release cycles are fully automated, speeding up-time to market and service to end users. The applications work independently, providing high reliability and availability of all services.

All the company’s requirements were met. Intoxalock is now positioned to move ahead more confidently as its employs new technologies and deploys new apps and updates to better attract new customers, all while providing stellar service to its entire client base.